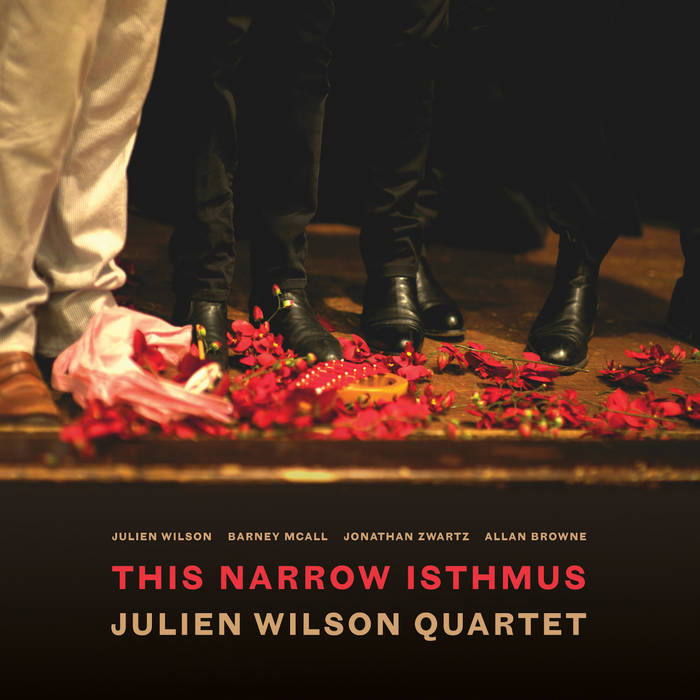 The title, taken from Thomas Moore's Lalla Rookh, alludes to the brevity of life. "This narrow isthmus 'twixt two boundless seas, the past, the future, - two eternities"

Recorded live in Sydney this is the quartet's second and final album. The band's debut 'This Is Always' won three Australian Jazz "Bell" Awards in 2014 and was the #1 selling Australian Jazz Album at Birdland Records. Reviewing that album John Clare wrote "The band Wilson has chosen could scarcely be surpassed anywhere: the interacting band can seem to drift effortlessly as smoke across the land, or break into stress patterns, deep swells and concussions, like the sea."

Where This Is Always focussed on standards and ballads, This Narrow Isthmus leans towards the blues and consists wholly of original compositions written with this group in mind. The concert this recording comes from was the fourth of only five shows that the quartet ever played and was the only performance that was recorded.

Allan Browne passed away in June 2015. He was a prolific player, composer, performer, mentor, poet, inspiration and all round top cat. In June 2014, a month shy of his 70th birthday, health issues prevented him from flying to Sydney for this show; so he drove the 900kms from Melbourne just for this gig. The release of this album is dedicated to his indomitable spirit and his lifelong motto "Hold to the now, through which all future plunges in to the past"

"Whether by stick, brush or hand, the much-loved Allan Browne was intent on being a team player, forever complementing his band members’ contributions. His impulsive calls of ‘yeah’, added real personality and warmth to the music." Australianjazz.net - June 10th 2014

"Make no mistake: this band was just as exceptional and distinctive as (Joshua) Redman's, and the tenor playing more so." Sydney Morning Herald - June 15th 2014

All compositions by Julien Wilson

Photos by Hayley Miro
Design and Layout by Luke Fraser/Ahr+

Special thanks to SIMA and APRA/AMCOS for financial support.

Julien Wilson is an Australian saxophonist and founder of Lionsharecords.com He plays regularly with a collection of Australia's finest musicians and can be heard live and on recordings with the likes of Stephen Magnusson, Barney McAll, Sam Anning, Andrea Keller, Jonathan Zwartz, Vanessa Perica, Stu Hunter & Ben Salter ... more

Sampa The Great joins the show to discuss her release, "As Above, So Below".