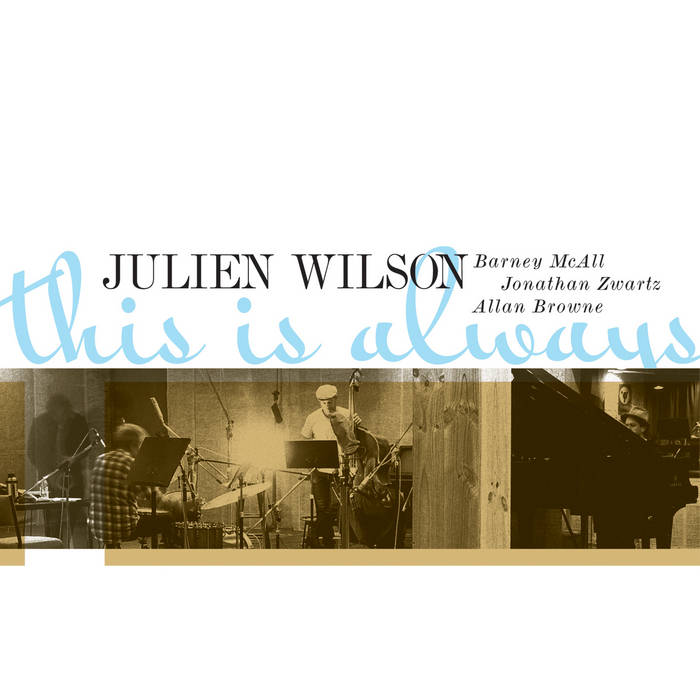 Matt Erion The guys set out to make a record with a specific feel, a recreation of the old Prestige Jazz sessions. They succeed. Every track feels like a classic.

On "Australia Day" 2013, Julien went in to the studio with three of his all time favourite musicians to record a jazz ballads session. The intention was to record an album in the spirit of the old Prestige off-the-cuff “meeting session” recordings, with no rehearsals and no headphones. Recorded in Melbourne and mixed in New York, the album sparkles with the essence of the classic jazz quartets and re-creates the smoke-filled ambience of a 1960’s Parisian Jazz Bar.

The album is the inaugural release on Australia's newest High Definition label, Lionsharecords. Wilson has thoughtfully assembled the never-before-heard dream-team of New York based pianist Barney McAll, with Sydney’s superbly deep and swinging Jonathan Zwartz on bass, and Melbourne's favourite drummer, Allan Browne. Together, they create a sound like no other band in the country. Deep yet light, Old-School and hip, informed yet inspired.

Wilson’s tenor has never sounded fuller or richer than on “This is Always”. Known primarily as a contemporary player, and composer and leader of ensembles with often unusual instrumentation, Wilson delves deep back in to the history of the tenor saxophone and his primary influences here. On his first recording with a “Classic” quartet he has chosen material that lets the players bring their own personalities to the fore. His tone and phrasing allude to a whole generation of the giants of the tenor saxophone.

"Julien is both subtle and magnificent. The tenor saxophone is like smoke, and it is like carved oak in his hands." AustralianJazz.net

"A tenor saxophone making gentle, sensuous jazz is a grand tradition, like paddle-steamers cruising on wide, slow rivers... and now Julien Wilson eases his own tenor into that tradition, in the process creating one of the great Australian jazz albums." Sydney Morning Herald

"a level of maturity, and a storytelling quality that place him proudly in the lineage of such great tenor balladeers as Lester Young, Dexter Gordon, John Coltrane, Stan Getz and Joe Lovano." Rhythms

"This album is an important milestone in Australian music and no antipodean Jazz lover should be without a copy. It should not be regarded as a trip down memory lane, but as a testament to the eternal now. The unsuspecting will believe it to be a loved classic album of the Prestige-era and scratch their heads to place it." John Fenton (NZ)

"Wanhon ballad album impressive modern Australia gave birth!
Is an Australian all-star quartet exactly. "Sounds bad difficult small something good do not have the CD of Wanhon? So much." Respond perfectly to requests from customers in the over-the-counter that, anyway listen to convince the large recommendation panel!"
Disk Union Review, Feather (Japan)

Julien Wilson is an Australian saxophonist and founder of Lionsharecords.com He plays regularly with a collection of Australia's finest musicians and can be heard live and on recordings with the likes of Stephen Magnusson, Barney McAll, Sam Anning, Andrea Keller, Jonathan Zwartz, Vanessa Perica, Stu Hunter & Ben Salter ... more

Sampa The Great joins the show to discuss her release, "As Above, So Below".