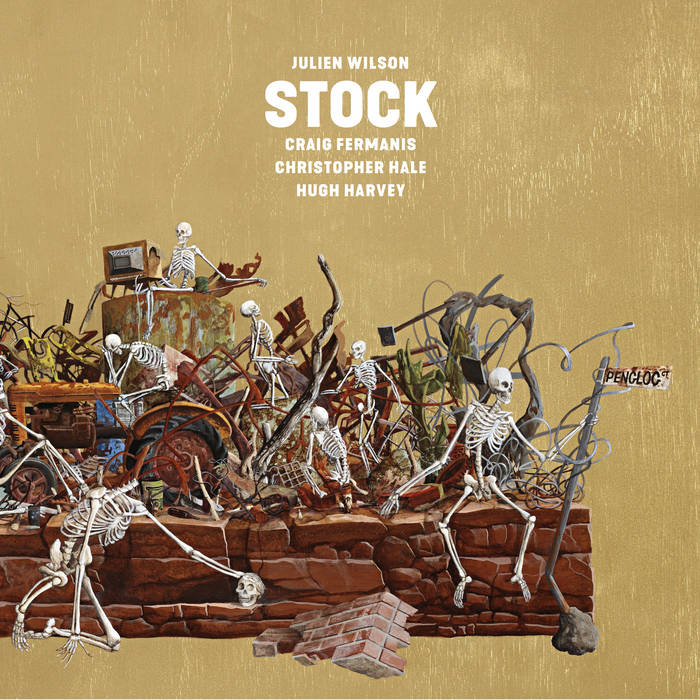 Jarel Kilgour I love this record! Very unique group sound and I love how each piece evolves. Thank you!

jcneave A great album and example of modern Australian Jazz.
Too Soon is one of the most touching and emotional pieces of music I've ever experienced. It was an honour to have known Ryan and the title of this piece is more than fitting.

Bursting in to the new decade as the #1 Independent Album on the AIR charts, STOCK is the debut release from an exciting Melbourne band who have been a regular working unit for close to a decade. Harnessing the interaction developed over hundreds of live gigs, the band have distilled a myriad of influences in to a unified intuitive approach.

As pianist Barney McAll says in the liner notes "This ensemble has the beautiful cohesion that is possible only when a band has been deep in the laboratory for many years.” NZ poet and journalist John Fenton concurs in his JazzLocal32 review with “While Stock is Wilson’s concept it is clearly a collaborative effort. No one creates at this level unless they are inside each other’s heads.”

Following a recent performance in the Blue Mountains, John Shand wrote in the Sydney Morning Herald that listening to STOCK was "like looking at the blues through a dissonant kaleidoscope; (their) playground is the whole gamut of jazz, from its earliest New Orleans roots to the golden tenor saxophone era of Coleman Hawkins and Ben Webster; from bebop to free jazz and jazz inflected with rock, funk and diverse music from around the globe. This quartet can dig deep anywhere across that gamut.”

Working in close collaboration with producer Lachlan Carrick (Gotye, Lior, CW Stoneking, Mojo Juju), STOCK utilised the studio to capture and expand upon a new electro-acoustic paradigm that has been evolving onstage. The result is a bold offering with a distinctly Australian accent.

The titles of the co-composed tracks reference natural phenomena known as thermal inversions, unusual weather events long associated with witchcraft and sorcery. These collective aural sculptures are echoed in the thought-provoking and evocative painting which graces the cover by poetic Australian environmental artist Dale Cox.

Released on Bandcamp on Jan 1st 2020, the contemporary marriage of music and art coincided with Australia's tumultuous entry to the new decade in a way which we couldn't have foreseen. The titles 'Exhale' & 'We don't have to' take on new meanings in this context; and 'Too Soon', a meditation on recently departed friends, becomes a prayer for an entire continent (planet) in danger.

‘I Believe this Belongs to you’ was previously released on the trio album Swailing (2014), which uncannily also featured a painting by Dale Cox on the cover with a similar theme, albeit one less evolved. In this instance, this composition is dedicated to our First Nations brothers and sisters. Those of us with genealogical origins from elsewhere cannot even begin to fathom what this current tragedy means from their perspective. The health of this land is intrinsically tied to the health of its people. And while we choose to ignore one, we damage the other, and ourselves in the process.

We believe now, as we have for many years, that the time for a TREATY is NOW.

Despite the lashings of existential dread, we remain hopeful and optimistic, and as Fenton enthuses of the musical result, “It is a joyful, freedom embracing, open-hearted exploration of sonic possibilities… an album which immediately brings a smile to your lips, exuding as it often does the sounds of a perfect summer (a happier summer than Australia is experiencing at present). IT IS THE SOUND OF NOW and I was delighted to hear in the new decade with this gem.”

We hope STOCK takes you on an epic sonic adventure far from the mind-numbing and frustrating realities of the modern world. We hope it provides a small escape hatch for sanity.

TOO SOON is dedicated to Clandy Ross and Ryan Lehman

This project has been assisted by the Australian Government through the Australia Council, its arts funding and advisory body.

We acknowledge that this album was created on the stolen land of the Wurundjeri people of the Kulin nation and recognize that their sovereignty was never ceded.

Julien Wilson is an Australian saxophonist and founder of Lionsharecords. He plays regularly with a selection of Australia's finest musicians and can be heard live and on recordings with Stephen Magnusson, Barney McAll, Sam Anning, Andrea Keller, Jonathan Zwartz, Vanessa Perica, Stu Hunter & Ben Salter ... more